When the Dancing Must Be Stopped 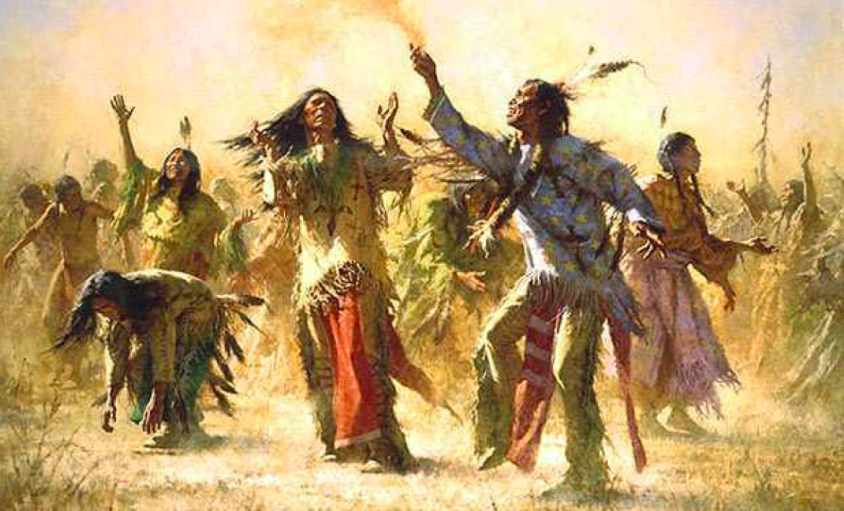 The Native American Ghost Dance, a simple circle dance involving all members of a community, was once seen as a national threat. How did this happen? And what is it about the joy and power of dancing together that helps people transcend even the most unbearable conditions?

Picture this. In the Fall of 1890, after years of drought that left wilted plants and few bison, when starvation was circling, Indians began to dance. Native Americans on reservations across the west, including Oklahoma, Arizona, Utah, Idaho, Montana and Wyoming, even Alberta, Canada, all danced through the night. The new “Ghost Dance,” inspired by the newly introduced Christian faith, had been adapted from the Lakota’s traditional Sun Dance. In doing so, Native Americans got back in touch with their ‘Indianness’ – with their connection to community, history, families, and identity. They danced like their lives and their heritage depended on it.

This had to be stopped. Under pressure from puritanical settlers, the “Ghost Dance Wars” became the largest military campaign since the end of the civil war, involving a full third of the US Army. Read the full account.

There is something about dancing, particularly in a group, that can render people almost unreachable. The ‘high’ is palpable; the sense of being a part of something bigger, perhaps wilder, lifts us. We become bigger. Our sense of what is ‘me’ vs what is ‘we’ fades. Many religions from around the world encourage and tap into this power. Simple group choreography at weddings and school dances and sports events pull us together.

So, in 1890, the United States rightly recognized that the Ghost Dance had great power – that it was nourishing a threatened community. But, rather that supporting that ritual, we chose to extinguish it.

The Lakota Ghost Dance and the Massacre at Wounded Knee