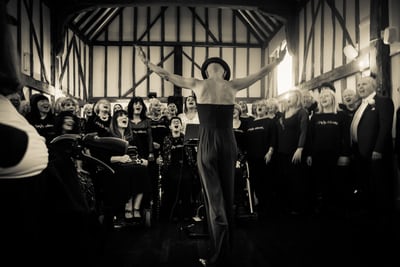 Cultures develop uniquely identifiable musical repertoires. Early works often carried the group’s history and values – stories in easy-to-remember forms, highlighting what is important and why. These are very ‘sing-able’ – and often leverage their unique instrumentation. Again, we can quickly identify the country or region after a few notes. These aren’t stereotypes as much as shorthand – a landing place from which to proceed.

Exposure to these cultural differences can build understanding. When Paul Simon introduced Americans to Ladysmith Black Mambazo, people revelled in this new musical paradigm. They got a taste of a different culture – just through the music.

Some of the quintessential American musical genres came from racial or geographic subgroups. Jazz, hip-hop and spirituals are but a few contributions and innovations the African-American community gave to the world. Many early Broadway musicals were written by members of the Jewish community who had a unique appreciation for the safety and opportunity America offered – the Gershwins, Rodgers & Hammerstein and Irving Berlin to name a few. God Bless America was so popular it almost replaced our national anthem.

Whenever a race or ethnicity celebrates ANYTHING, music carries much of the load. Old songs that bring the next generation into the fold. Songs to be sung together and music that gets people moving – TOGETHER. Music binds us; we see one another singing the same words we are singing – and we become one for those few minutes. We breathe together. We feel that same feeling – together.