Mandatory Assimilation – “Kill the Indian. Save the Man.” 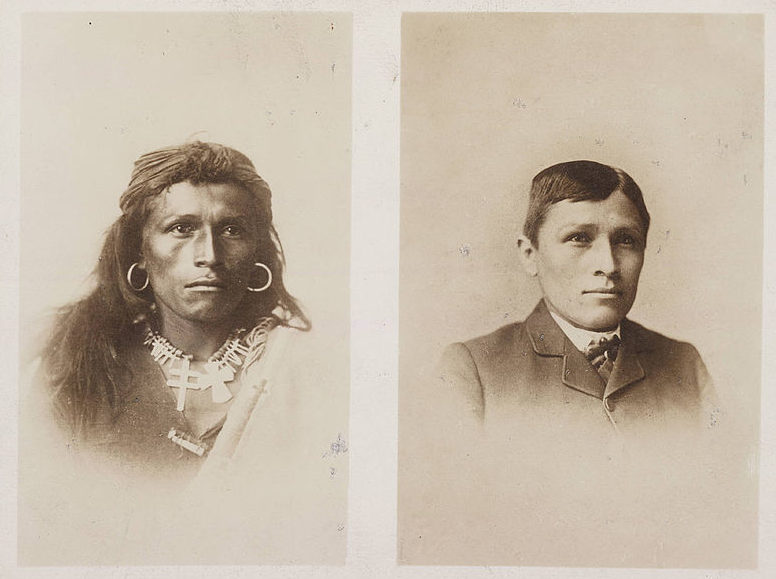 Image of Tom Torlino, Navajo, before and after entering the Carlisle School

“Culture war – the struggle between social groups for dominance of their values, beliefs, and practices.” Culture wars can be deadly, not only for individuals but for an entire race and way of life. Cultural genocide.

In the early U.S., Americans had an Indian problem. Their belief in manifest destiny (that this whole continent was destined to belong to the white Europeans) magnified the challenge. All the indigenous peoples were in the way. They tried removing them (Trail of Tears), initiated when the people of Georgia wanted the gold that was in Indian territory. They tried military dominance, ending with Custer’s efforts. Then, the nearly fatal blow, came with efforts to kill the spirit and the culture. Those things that defined Native American identity.

The Carlisle Indian Industrial School. One of the most brutal weapons in this culture war was initiated by a Civil War veteran, Capt. Richard Henry Pratt, who convinced the government to fund Indian boarding schools. Mandatory assimilation. The Carlisle Indian Industrial School in Pennsylvania was the first of hundreds of publicly run institutions, supported by hundreds more run by Christian charities. Children taken from the reservations were given new names, uniforms, a new language, regimens, stories, history and food. They were not only forbidden to speak their own language (and punished when they slipped up), but any reminders brought from home were ceremoniously burned. The life they knew – the family left behind – were presented as shameful.

Homecomings – weren’t. The cycle of destruction intensified as Native Americans were forced onto smaller reservations devoid of opportunity – and hope. Freedom and community were replaced with dependence and despair. When their children would return home after 9 months in assimilation schools, looking, acting and speaking like the white man, you can only imagine how their parents felt. And the kids? Well they had been receiving a steady diet of criticism of the Native way of life. Many families fell apart.

One boy, who had experienced extreme punishment over instinctively using his native tongue, just fell apart when he returned to his family. He couldn’t remember his own language. His parents held him close – and kept him home. He later said, as he was trying to reconnect with his heritage and identity, “I tried to reconnect with our spirits, but they didn’t understand English.” As a man now in his 60’s, he wept retelling the story. “I lost my voice.”