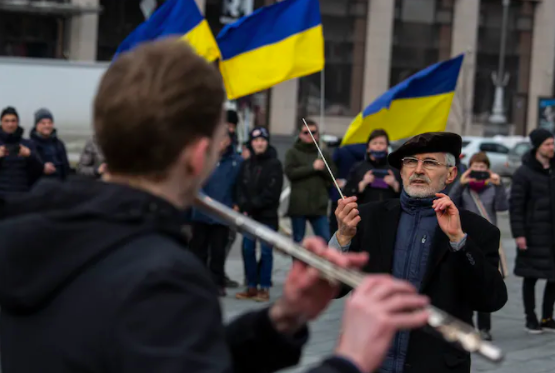 We can only imagine what it took for these brave musicians to play in this historic square. Two of their members had been killed days earlier in Kharkiv. The orchestra played the Ukranian National Anthem and Beethoven’s “Ode to Joy” while observers were dressed in flak jackets.

It reminds me of the days immediately following 9/11. I lived just a few blocks from the World Trade Center. On the third evening, in Union Square Park as we held our candles, the Gay Men’s Chorus led us all in a vigil with songs of grief and memoriam – ending with, “Those little town blues … are melting away …” You can take it from there. Hope and goodwill and resilience surged through the group. There would be a good tomorrow.

And there will be for our Ukranian friends as well. Peace.

“As in wars of the past in other parts of the world, music and poetry have become an integral part of the fight — used in Ukraine for recruitment, to soothe loss and comfort fear, to remember and to stir patriotism. Military chaplains sing hymns during sermons at suspected airstrike sites. At funerals for soldiers, pastors deliver melodic prayers. And on social media, viral videos include a Ukrainian soldier singing a Ukrainian folk song to a hip-hop beat and a young woman hauntingly playing “What a Wonderful World” at Lviv’s train station.” – Washington Post.