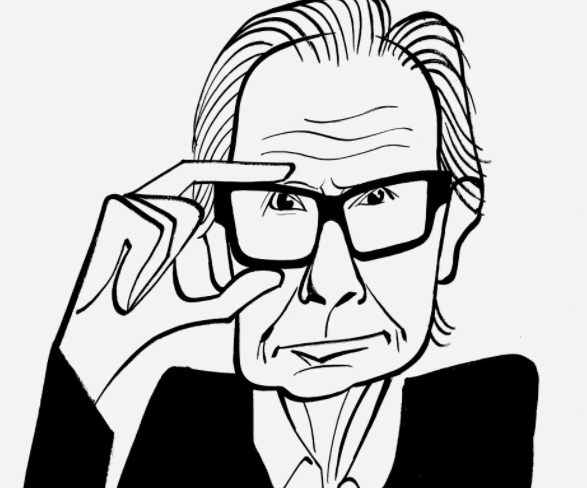 “If you meet a man with the bottom button done up, call a cab. He’s not currently functioning—you shouldn’t be breathing the same air.” – Bill Nighy

Let me begin by saying I am such a Bill Nighy fan. I have watched and rewatched his Worricker series on Masterpiece Theater for the pure pleasure of watching him move and act with easy dignity and grace. He could be the poster boy for what an unflappable upper class gentleman looks like. In the recent New Yorker magazine article, Bill Nighy’s Obsessions, Onscreen and Off, he gives us an unexpected peek into his very specific fashion rules.

“I used to be a bit squeamish about V-neck jumpers, but I’m much more relaxed now; they have to be very small and they have to be neat and they have to be navy blue —and a white button-down shirt. … When buttoning a three-button jacket, it’s sometimes for the top one, always for the middle, and never for the bottom. If you meet a man with the bottom button done up, call a cab. He’s not currently functioning—you shouldn’t be breathing the same air.”

Much of this is wonderfully tongue-in-cheek, but it also helps us see and understand some basic truths about how our attire sends messages that get us included in or excluded from group cultures. Every group has rules that are required of members. Many of those rules are so subtle that outsiders can miss them entirely – and thus, we inadvertently trip over them. Members know. They may not say anything – but they know.

Groups appreciate the effort. It shows respect. Not to say that insiders don’t get a chuckle or two ….

As Oscar Wilde said, “A well-tied tie is the first serious step in life.”

What are the fashion rules of your groups?

Bill Nighy’s Obsessions, Onscreen and Off by Sarah Larson, The New Yorker

Get Fitted: 28 ways the Hip-Hop Generation Made Baseball’s Classic Cap a Cultural Phenomenon

And, finally, some discussion ideas to explore the role of fashion in their lives: