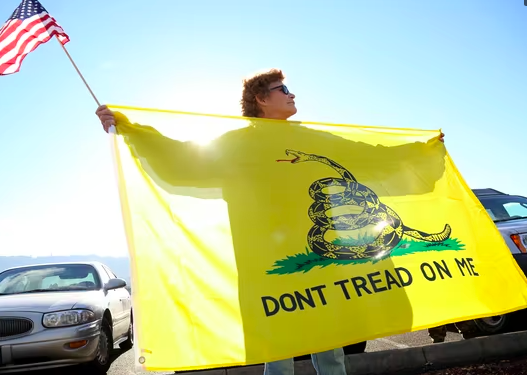 Flown by many protesters at the U.S. Capitol on Jan. 6, the Gadsden flag has a design that is simple and graphic: a coiled rattlesnake on a yellow field with the text “Don’t Tread On Me.” But that simple design hides some important complexities, both historically and today, as it appears in rallies demanding President Donald Trump be allowed to remain in office.

The flag originated well before the American Revolution, and in recent years it has been used by the tea party movement and, at times, members of the militia movement. But it has also been used to represent the U.S. Marine Corps, the U.S. Navy, the U.S. men’s national soccer team and a Major League Soccer franchise.

As a scholar of graphic design, I find flags interesting as symbols as they take on deeper meanings for those who display them. Often, people use a flag not because of what is explicitly displayed, but because of what the person believes it represents – though that meaning can change through time, and with one’s perspective, as has happened with the Gadsden flag.