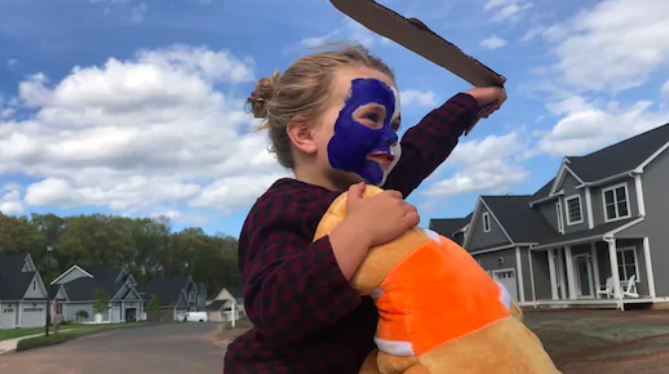 Madison Presser, wearing a giraffe costume, kneels on the cushions of a gray couch in her family’s living room.

“Brother, help me,” Madison pleads, grabbing onto the top of the couch. Her father, Dan, stands on the opposite side of the couch and places his hands over his daughter’s.

Madison falls 15 inches onto cushions on the floor. To the side, 1-year-old Barton, also wearing an animal costume, cries.

This is what a video looks like in the Presser family’s movie project during quarantine from the novel coronavirus pandemic. In this instance, the Pressers copied an iconic scene from “The Lion King,” when Scar drops Mufasa from a cliff, and Mufasa’s son, Simba, reacts in anguish.

In one scene Presser shot for a copy of “The Goonies,” it took 40 minutes for five children to look in the same direction. In an “Old School” remake, Barton ripped off his diaper in the middle of a shot. It has been a change-of-pace for Presser, who’s used to working with people comfortable in front of cameras as a producer for ACC Network.