Why Do Sikhs Wear Turbans? 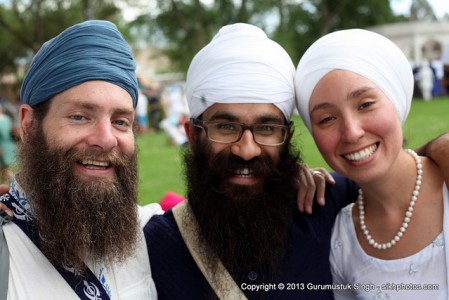 Wearing a turban has always been in the Sikh tradition from the time of Guru Nanak, but it was formalized by Guru Hargobind in declaration of sovreignty and royalty despite the fact that only kings at the time wore turbans. We can see that turbans signify royalty.

Turbans are one way that Sikhs are recognizable and distinct (Niara). Guru Gobind Singh gives his blessings to his Sikhs who remain Niara.

The turban also houses and protects the uncut hair (Kesh) coiled on the top of the head. The hair is tied at an important spiritual center on the body – the Dasam Duar (7th Chakra), and the turban contains the hair. The turban also crosses pressure points on the temples which help a person to be calm and centered.

Shanti Kaur encourages women to wear turbans because this is a tradition not based on gender but on the human body, and yet most Sikh women don’t wear one. The turban is the insignia of a Sikh so that we have to stand out and be accountable for the values that we hold.