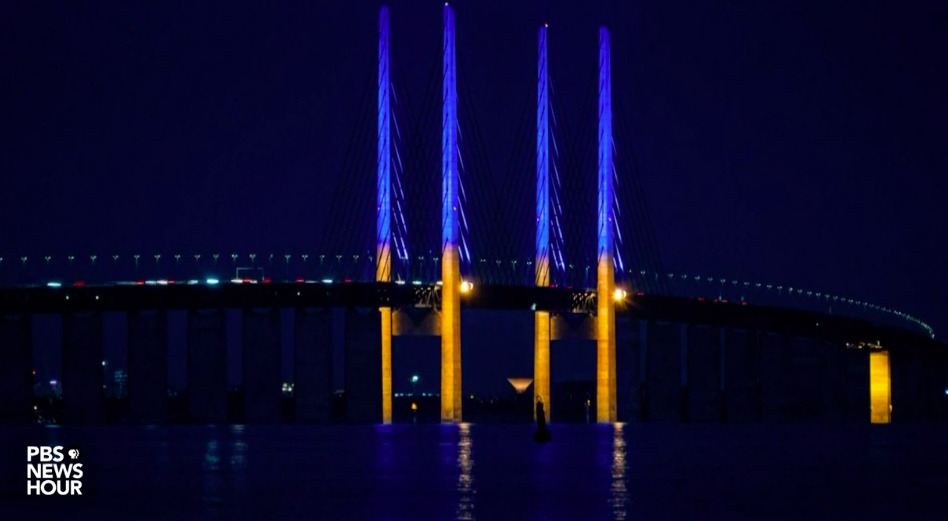 Ukrainians during this time of crisis. The efforts range from singing to light displays to prayers.

Jeffrey Brown has a look for our arts and culture series, Canvas.

JEFFREY BROWN: Instead of laughter as “Saturday Night Live” opened, a prayer for Ukraine

sung by the Ukrainian Chorus Dumka of New York,

whose members stood in front of candles and sunflowers, the Ukrainian national flower.

Around the world, the response to the Russian invasion has taken many forms,

some of it honoring Ukraine and its struggle,

in this London street performance of the national anthem by Ukrainian baritone Yuriy Yurchuk.

even the crashing waters of Niagara Falls. There were also punishments against Russia and Russians.

And the Metropolitan Opera Took a step to — quote — “ring the alarm.”

PETER GELB, General Manager, Metropolitan Opera: We can no longer engage with artists

or institutions that support Putin or are supported by him, not until the invasion

and killing has been stopped, order has been restored, and restitutions have made.

will not be allowed an entry in this year’s Eurovision Song Contest, saying the inclusion

of a Russian competitor would — quote — “bring the competition into disrepute.”

Other such moves came fast and furious in the world of sports.

British soccer fans from Liverpool and Chelsea came together to sing

governing body announced it would move its championship match from St. Petersburg to Paris.

other sports have taken their own actions. The International Judo Federation suspended Putin,

a black belt in the martial art, as its honorary chairman.