The story of the Iranian new year, Nowruz, and why its themes of renewal and healing matter 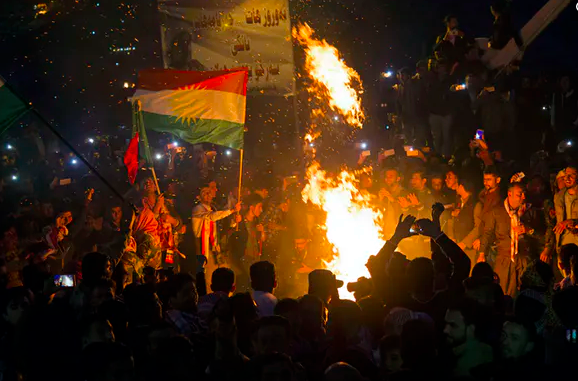 Nowruz – or “new day” in English – is the Iranian new year. Celebrated at the exact moment of the spring equinox, this is a secular festival with roots that go back over 3,000 years. It was shaped by people of the Zoroastrian faith, believed to be the world’s oldest religion.

But King Jamshid also noticed that during those dark winter months, many of his subjects had started to quarrel with one another, and injustice threatened to take over. The king decided to mark the beginning of Nowruz with a festival called Shab-e-Charshanbeh Souri, which translates as “Scarlet Wednesday.”

The festival involves jumping over a series of fires – a tradition brought by the Zoroastrians, who worshiped fire as the sign of everlasting strength and health. The idea behind Charshanbeh-Souri is to jump over the fires to cleanse oneself of the ills – physical, emotional and societal – of the past year. It is a way to prepare for the rebirth that Nowruz brings.

The day after Charshanbeh-Souri, families begin preparing their homes for Nowruz. They set a table called the haft-seen – translating to “seven S’s.” At the center of the table are seven items that begin with the letter S, each holding a particular significance.

Seeb (apple) is the symbol of beauty, seer (garlic) is the symbol of health and medicine, somagh (sumac) represents sunrise, sabzeh (green grass) represents healing and rebirth of the Earth, serkeh (vinegar) symbolizes patience, senjed (olives) signals love and, finally, samanu (pastry paste) is about the power and strength of forgiveness.

At the center of the table, a mirror is placed for reflection, flowers to symbolize the Earth’s healing, eggs to symbolize life and a live fish to represent one’s connection to the animal world. Some families place a religious book at the table, such as the Quran, Bible or Avista; others place books by favorite Iranian poets such as Hafez or Rumi.