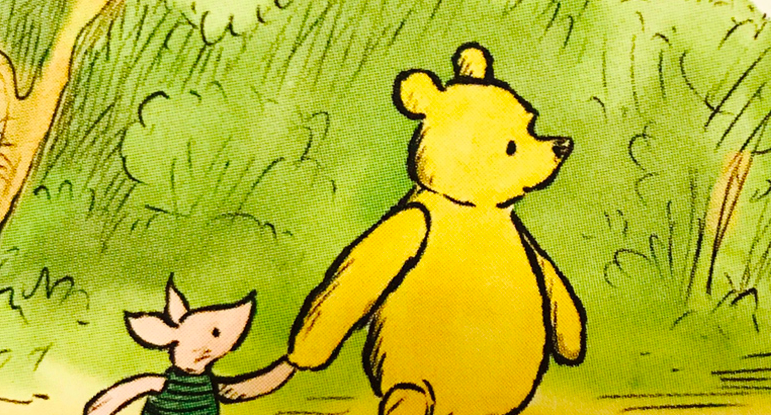 Literature, especially children’s literature, has a therapeutic effect on our mind. If the heavy burden of prolonged lockdown is trying to knock you down, take a sneak peek to the magical world of Pooh bear who stays in Hundred Acre wood with his wonderful companions like Piglet, Tigger, Owl, Eeyore. Together they constitute a topsy-turvy world, something that stays beyond our much-calculated life. Pooh is a bear with little intelligence, yet he is compassionate. There is an episode where Eeyore is sad. He thinks no one cares for him. No one even remembers his birthday. Hearing this, Pooh plans a surprise birthday party for his/her (there has been a much controversy regarding Pooh’s gender, Well Pooh is Pooh!) friend. There is a deliberate attempt on the part of the writer to show that Pooh’s community is a well- knitted one where they always cherish their unity. The way Pooh and Piglet together overcome their fear of a Heffalump (an imaginary creature that only appears in Pooh’s dream) is hilarious yet worthy to remember. Pooh’s world may not be guided by reason and logic, yet it treasures some kind of sensitivity.

The books concerning life and adventures of Winnie-the-Pooh are remarkable creation by the English author A.A. Milne and the illustrator E. H. Shepard. Quite interestingly, both of them served in World Wars. Milne created this magical world of Pooh Bear for his son Christopher Robin who incidentally happens to be the chief character in Pooh narratives. Robin’s original stuffed toys were the inspiration behind Milne’s creation of Pooh and other characters. Apart from being a father’s gift to his only child, Pooh signifies something more. The four books of Pooh appear between 1924-1928, the interim period between two great Wars. The collaboration of Milne and Shepard, who had witnessed the devastating impact of war, results in a deliberate portrayal of an alternative world where everything, that appears as a threat in our real life including battle with an unforeseen enemy (Like Heffalump) is reduced to mere caricature. This alternative world lacks any structured linguistic pattern. None of the characters can spell “Happy Birthday” properly. On Eeyore’s birthday gift, Owl, after repeated attempts, manages to write “Hipy Papy Btuthdth”. This temporary rejection of reality by Milne and Shepard probably acted as an antidote to their fits of depression. Who knows?