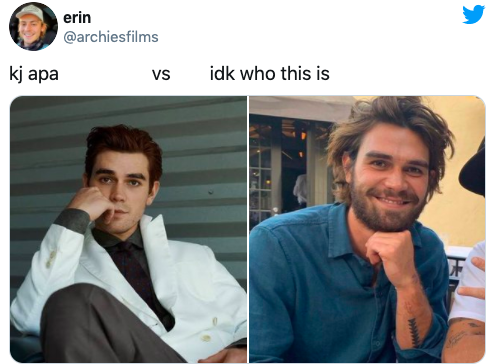 And, of course, it has fans divided.

If you’ve tried a new beauty look while isolating, you’re not alone. Riverdale star KJ Apa, who plays the heroic redheaded Archie Andrews on the popular CW show, is also trying out a new look that has fans… hmm, shaken up.

And while it certainly looks like KJ is feeling himself, some fans aren’t so sure about KJ’s new look. While some of them are loving his more “rustic” look, others are yearning for the clean-cut Archie they fell in love with on-screen. One fan posted a side by side of a more polished KJ posing for a magazine shoot versus a casual shot displaying the beard in all its glory, writing, “KJ Apa versus idk who this is.”