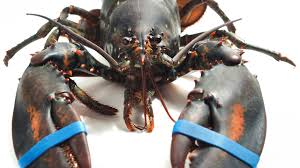 Lobster Lingo – For those who weren’t raised along the coast of Maine, here’s a quick primer on lobsters:

Berries – Lobster eggs. Conscientious, law-abiding lobstermen will gently return a berried female back to the water after V-notching her tail, indicating to others that she’s a valuable resource. Her 10,000 or so eggs, carried on the outside of her shell, will be released after 9 or 10 months, and of these, about 10 of them will survive. That’s 1/10 of 1 percent who even have a whiff of a chance of reaching maturity.

Bugs – Newly hatched lobster larvae. More generally, an affectionate term for all lobsters, as in “Come ovah for dinner tonight for some boiled bugs.”

Chicken – A one-pound lobster. It can take as long as 7 years in the cold waters of the northern Atlantic to grow to this size.