Hair Curlers in Public? That’s Just How They Roll. 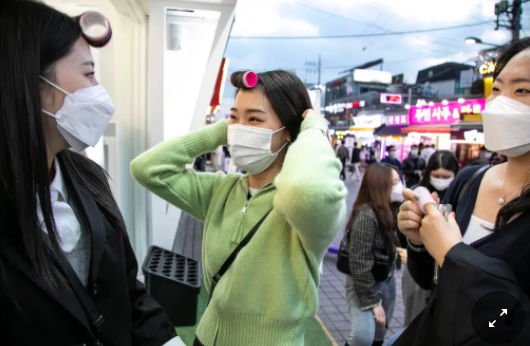 The young South Korean women who wear them say they are not only functional, but also a sign of shifting ideas about beauty and a reflection of the country’s generational divide.

In a subway car on a recent fall afternoon, seven young South Korean women stood quietly among a crowd of commuters. They wore seasonal jackets and wind breakers just like other passengers, but one accessory made them stand out: old-fashioned hair curlers locked tightly into their bangs.

These plastic cylinders, usually Velcro-covered, can be seen nearly everywhere around Seoul — in cafes and restaurants, on public transportation, on the street.

And while they may seem like a vestige of a previous era, the young women who wear them say they are not only functional but also a sign of shifting ideas about gender and beauty and a reflection of the country’s generational divide.

Ms. Jung doesn’t view curlers as a relic of the past, but as a tool to help her look put together as she zips across the city from one place to the next.

“There is a notion that women today should always have their hair be presentable,” she said. She bristled at the idea that she was supporting antiquated beauty standards or clinging to the days when going outside in Seoul without perfect hair and makeup was like leaving the house without wearing clothes.

Unlike previous generations of women who felt it was necessary to get ready in private, hidden from the sight of men, she and others care much less if their grooming efforts are visible, Ms. Jung said. “That’s why it doesn’t matter if you have a curler in on the subway or cafe.”