Five on the Black Hand Side:Origins and Evolutions of the Dap 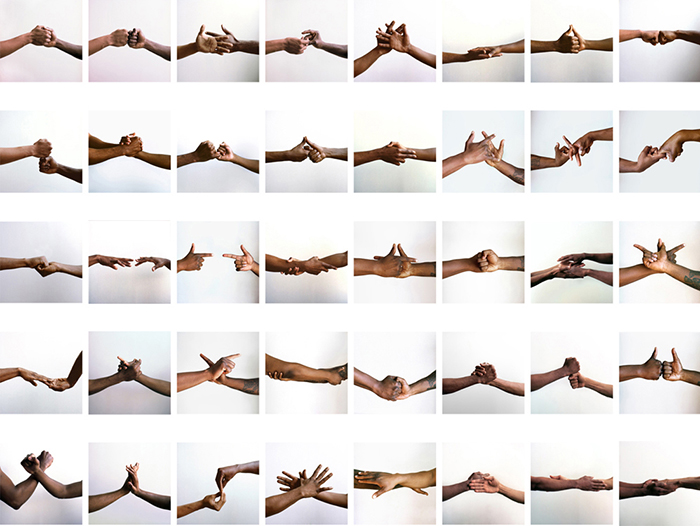 Five on the Black Hand Side is a project exploring gestural languages that were born in African American communities during the 1960s and 1970s, including the “the dap” and the black power handshake. When we see youths, athletes, or even President Obama giving a fist bump or dap, we think of these gestures as mere greetings and are not aware of the origins and historical significance of these languages.

Historically, the dap is both a symbol among African American men that expresses unity, strength, defiance, or resistance and a complex language for communicating information. The dap and the black power handshake, which evolved from the dap, were important symbols of black consciousness, identity, and cultural unity throughout black America.

The dap originated during the late 1960s among black G.I.s stationed in the Pacific during the Vietnam War. At a time when the Black Power movement was burgeoning, racial unrest was prominent in American cities, and draft reforms sent tens of thousands of young African Americans into combat, the dap became an important symbol of unity and survival in a racially turbulent atmosphere. Scholars on the Vietnam War and black Vietnam vets alike note that the dap derived from a pact black soldiers took in order to convey their commitment to looking after one another. Several unfortunate cases of black soldiers reportedly being shot by white soldiers during combat served as the impetus behind this physical act of solidarity.

The dap, an acronym for “dignity and pride” whose movements translate to “I’m not above you, you’re not above me, we’re side by side, we’re together,” provided just this symbol of solidarity and served as a substitute for the Black Power salute prohibited by the military.

The dap was banned at all levels of the military, and thus many black soldiers were court-martialed, jailed, and even dishonorably discharged as a punishment for dapping. Military repression of the dap further cemented a desire for a symbol of solidarity and protection among black men.