Emily Quinn: Male Or Female Is The Wrong Question—How Can We Rethink Biological Sex? 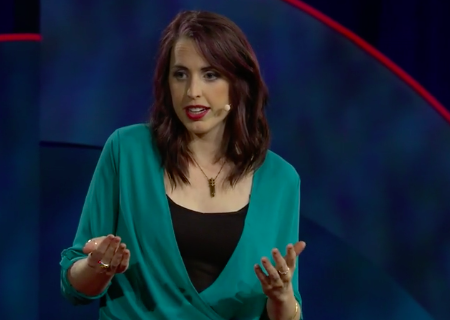 12-minute TED Talk – Artist Emily Quinn is intersex. She’s one of over 150 million people in the world who don’t fit neatly into the categories of male or female. She explains how biological sex exists on a spectrum.

Emily Quinn is an artist and activist. She worked at Cartoon Network on the Emmy Award winning show, Adventure Time. While there she partnered with interACT and MTV to develop the first intersex main character in television history. She came out publicly as intersex in a PSA alongside the character’s debut. She later worked as the Youth Coordinator for interACT: Advocates for Intersex Youth.

As an activist, she speaks about intersex issues before audiences and through her YouTube channel: intersexperiences. As an artist, her most recent projects include a genderless puberty guidebook and a portrait series of intersex people that will be exhibited at medical schools across the U.S. in 2020.