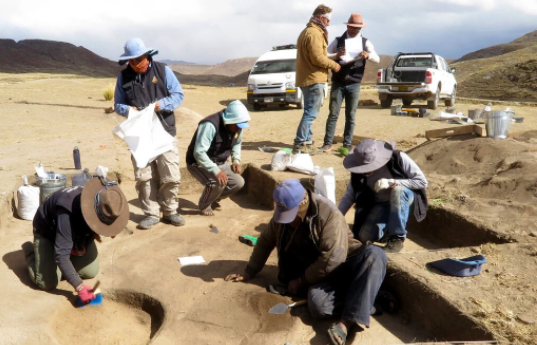 He and others found the grave of the young female with the hunting materials at a site called Wilamaya Patjxa in the Puno district of southern Peru at an altitude of almost 13,000 feet. A. Pilco Quispe, a local collaborator, first found artifacts in that area in 2013 near the community of Mulla Fasiri. In 2018, working with community members, Dr. Haas and others excavated an area of about 400 square feet, recovering about 20,000 artifacts. They found five burial sites with remains of six people, one of whom was the hunter.

That find was particularly exciting. One of his collaborators kept finding projectile points, Dr. Haas said, and then a collection of points and other stone tools, with the remains of a skeleton. The group of excavators was thrilled, he said, and the substance of the conversation was, “Oh, he must have been a great chief. He was a great hunter.”

Dr. Haas then looked at 429 burials in the Americas from about 14,000 to 8,000 years ago and identified 27 individuals whose sex had been determined who were found with big game hunting implements. Eleven were female and 16 were male. He and his authors acknowledged that the data was not conclusive for these burials, and that the only individual that was undeniably female and a hunter was the person from Wilamaya Patjxa. But, Dr. Haas said, the preponderance of the evidence still led to the conclusion that females were about 30 to 50 percent of the big game hunters.