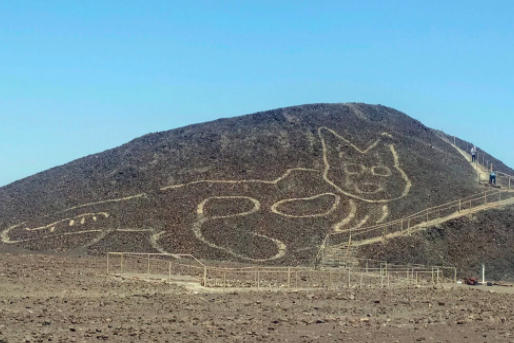 The image, stretching for 40 yards on a hillside in Peru, shows a creature with pointy ears, orb-like eyes and a long striped tail. It appears to be a cat lounging, as cats often do.

Archaeologists stumbled across the faded etching while remodeling a section of a UNESCO heritage site known as the Nazca Lines, Peru’s Ministry of Culture announced last week.

The catlike geoglyph — which experts say dates to 200 B.C. to 100 B.C. — is the latest discovery among the carvings of larger-than-life animals and plants previously found between the towns of Nazca and Palpa, in a desert plain about 250 miles southeast of the capital, Lima.

“The discovery shows, once again, the rich and varied cultural legacy of this site,” the ministry said in a statement. …

By Tiffany May, New York Times